Although it mainly prefers the external environment, the olive bonsai, as well as most fruit bonsai (from apple to peach, from mandarin to chestnut) lives without problems even indoors, and therefore in apartments, as long as it can count similar to those typical of the natural habitat. As for the olive tree, we are dealing with an evergreen plant typical of the Mediterranean area. The original tree has a long-lived and massive structure, with the characteristic trunk, rich in cavities, twisted on itself, almost divided into different parts. The wild species, on the other hand, has a structure with reduced dimensions, and is therefore more suitable for the creation of a bonsai. 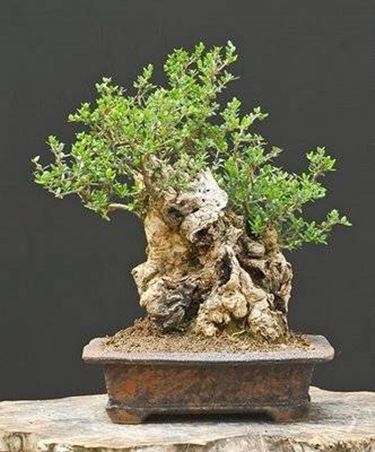 Having said that the reproduction of the olive tree occurs by seed, layering and cutting, it is not easily adaptable to bonsai, although it is a long-lived and resistant species. The creation of the bonsai, in any case, can take place through the seed method, which involves burying the seed in spring or late summer in composite soil. It is, in fact, a rather long system: to have a plant to be transformed into a bonsai it takes a few years. The advantage, on the other hand, is that the development and shape of the plant can be controlled right from the start.

As for the cutting, it is a rather complicated method with a low success rate; the positive aspect, however, is that it is much faster than sowing. In practice, it is necessary to take, in the autumn months, a woody branch to be planted in the ground (preferably mixed with sand), taking care to immerse the part to be buried in a solution of hormones, in order to facilitate the development of the root system. After about two weeks, the successful cutting can occur: if it has taken root, the first leaves appear. olive tree bonsai plans to collect wild shrubs in nature, so as to be able to count on subjects with leaves more suitable for bonsai as they are smaller. Everything must take place in spring: dig up to the root system of the shrub; then it is extracted and placed in the appropriate soil: when the plant has acquired the right vigor, bonsai techniques can be put into practice. For the creation of an olive tree bonsai, perhaps the best method is represented by layering. Also in this case the period indicated for the intervention corresponds to the spring months.Obtaining a seedling, starting from an adult branch of the original plant, the chosen branch, once barked, must be placed inside a plastic bag containing soil: when the roots emerge from the callus, the branch is cut and repotted. Of course, to create a olive tree bonsai you can, quite simply, start from a normal plant that can be bought in the nursery. By choosing a dwarf olive tree, all you have to do is prune it and adjust its shape by lowering it; alternatively, you can opt for a pre-bonsai plant: it is a species cultivated specifically for less experienced bonsai enthusiasts, which can be worked immediately, but which has a higher cost. Of course, once the bonsai is created it needs care and attention.First of all, the plant must be placed in a bright spot, away from heat sources and drafts, but still characterized by good ventilation. The olive tree bonsai lives well indoors, but also outdoors in the sun, as long as it is not subjected to potentially dangerous frosts.

The seedling must be watered at any time of the year, even in winter: when the soil is dry, it is necessary to proceed with the administration of water. As a guideline, we can suggest watering the olive tree bonsai every day in summer, and at least a couple of times a week in autumn and spring. Finally, in winter, there is no need for more than two waterings per month. Water should be poured over the soil, being careful not to get the leaves wet.

The administration must take place slowly and gradually, so that the substrate has time to retain it as much as possible. On the hottest summer days, watering must be accompanied by the nebulizations of the foliage. Finally, it is worth mentioning the rules to be respected when pruning the olive bonsai, which requires a first intervention in the winter season and a recall to be performed in early spring (without forgetting the topping that must be carried out at the beginning of June). 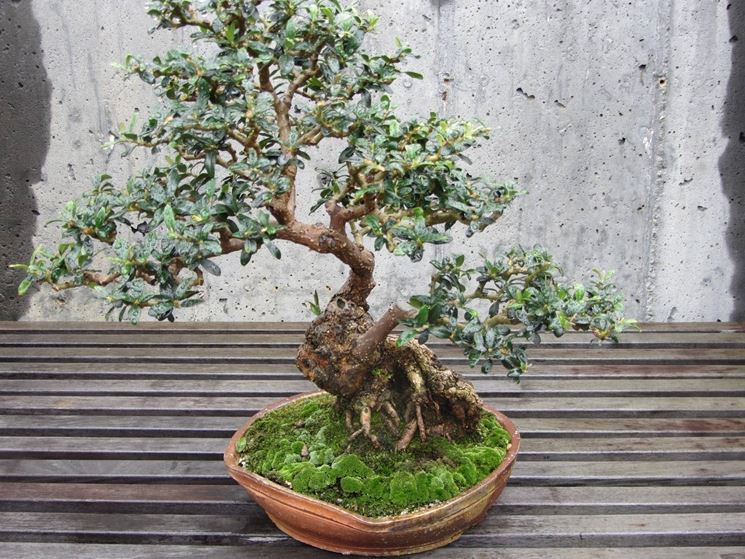 The purpose of pruning, for this species, is to thin out the foliage in such a way that any point of the plant can receive sunlight and heat. During the year, then, to the topping and pruning of formation it is necessary to add maintenance interventions which consist in the removal of broken branches, branches with irregular course or branches affected by attacks of parasites. As far as the intervention modalities are concerned, it is advisable to use small shears whose blades, necessarily very sharp, have been previously disinfected.