Ficus ginseng is called Ficus retusa (or Ficus microcarpa) cultivated as bonsai, this is because the plant develops a large and enlarged stem and large and gnarled aerial roots, and at first sight it recalls the ginseng roots used in herbal medicine, which do not have to nothing to do with ficus, deriving from a species of Panax.So we can say that the term ginseng in this case is used as a kind of nickname, although in fact we commonly hear of ficus ginseng rather than ficus retusa, perhaps because the term ginseng is more pleasant than the real botanical name of the plant. It is a large tree, which naturally grows in the humid semi-tropical areas of Asia, in the rainforests; its cultivation as a bonsai is very widespread, especially because the cultivation in the apartment generally takes place successfully, and therefore it is possible to admire our bonsai at home throughout the year. ancient, even when the ficus is still young; the leaves are large and shiny and certainly favoring the development of minute leaves is the biggest challenge facing a bonsaiist who intends to grow a ficus ginseng.It is an evergreen tree, which has a fairly continuous development throughout the year, therefore we will have to consider the plant as having no period of vegetative rest, and act accordingly. 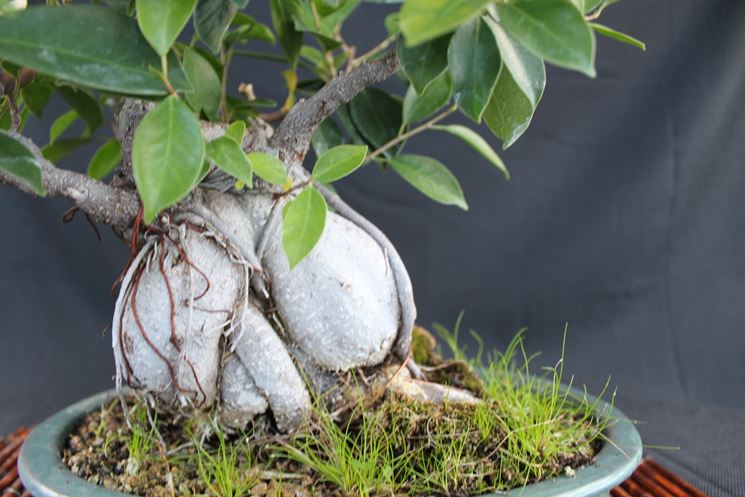 Ficus, phalaenopsis, areche, anthurium, all these plants are certainly fine in our home as regards the average temperature present, 18-20C night and day, 365 days a year, more or less the temperature they would enjoy in nature, in the areas of origin, more or less; Unfortunately for the air indoors, even if at the right temperature, it does not have the correct humidity which is useful for the life of these plants.

The air conditioner, the heating system, the fireplace, the pellet stove, have the defect of draining the air of the house, in a constant and very evident way, if not for us, for our plants, which would be fine in a rainforest, with regular rains and very high humidity, which often condenses to form large banks of fine mist.This lack of humidity is often the greatest problem for plants living in apartments, and also for Ficus ginseng, which without ambient humidity will begin to have foliage increasingly opaque, to develop little and sometimes to lose its leaves.When we talk about environmental humidity, we are absolutely not concerned with watering, in fact the rainforests are not characterized throughout the year by rains similar to the Italian autumn rains, which last whole days and completely saturate the soil; the tropical or semi-tropical plants that we grow in the apartment love to be watered regularly, but they also fear stagnant water and a soil that is always soaked suffocates the roots, which constantly under water cannot breathe. Then the watering of the ficus ginseng they will be quite regular, and will moisten well all the bread of earth in which the plant is grown; but they must be supplied only when the soil dries out, in order to avoid the presence of stagnant water. Certainly in better health a ficus ginseng that is watered less than necessary, compared to the specimen that is drowned in water. moistened regularly with demineralized water, to prevent it from staining the foliage; these vaporizations must be supplied as often as possible, intensifying them in the event of high temperatures, air conditioner on, heating on. 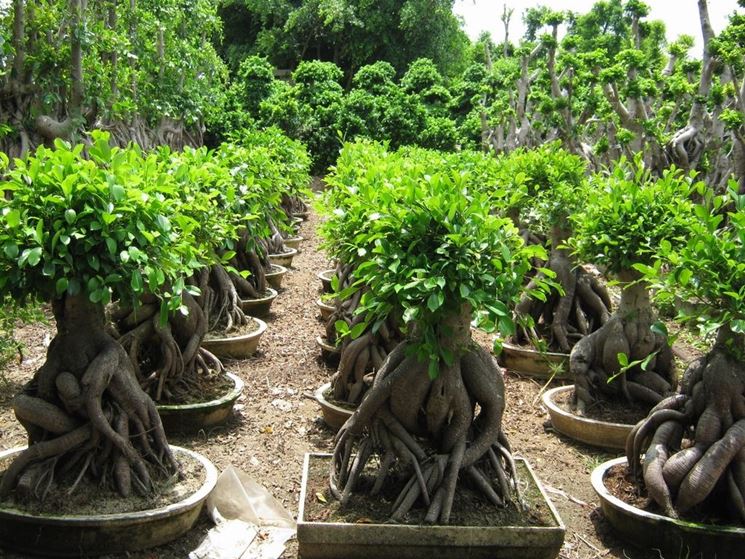 The ficus ginseng grown as bonsai love a fresh and well permeable soil, quite drained; it is prepared by mixing lakadama with an equal quantity of good quality universal soil; these plants are quite demanding regarding the mineral salts contained in the cultivation substrate and produce a good root system, for this reason it would be good to repot every year, or every two years, the young bonsai, changing all the soil and pruning the roots about half of their length.

It is an evergreen plant, for this reason it tends to grow throughout the year, except perhaps the hottest months of the year and those with the shortest days; therefore we will provide a good fertilizer for bonsai throughout the year, halving the dose in December and January and in July and August; let’s avoid fertilizers that are excessively rich in nitrogen, which tend to favor the development of large leaves.

The ficus retusa tends to have quite minute leaves, there are also varieties with naturally small leaves, which therefore do not worry the bonsai. A plant in good health tends to produce large and healthy leaves, which must be pinched throughout the year, to avoid that over time they tend to get bigger and bigger, becoming similar to those of a ficus benjamin.

Often, once a year, in spring, the almost total defoliation of the sapling is used, to favor the development of a large number of leaves at the same time, which will be decidedly minute. To prevent the plant from suffering excessively from defoliation, at least one leaf is kept for each apex of the twigs.

Ficus do not like drastic pruning, so we proceed trying to prune only small branches, and only when actually necessary; on the market there are many ficus ginseng, often already very well laid, which therefore do not require large training pruning, are certainly suitable for beginners, who could permanently ruin a young plant with a careless pruning.

When it comes to bonsai ficus we always or almost always refer to the bonsai of ficus retusa. In fact, although in nature there are many species of ficus and as many varieties of this plant, as far as the creation of bonsai is concerned, the use of ficus retusa is almost always used. The ficus in our country are plants that are grown as houseplants as in the winter season they do not tolerate cold and sub-zero temperatures. The same goes for the ficus bonsai, which are to be kept indoors away from cold drafts.

Let’s also remember to put the ficus bonsai in a bright area because the leaves of this plant need a little light to be able to vegetate properly. Therefore, positions close to light sources such as a window, a glass window or a glass door are suitable.